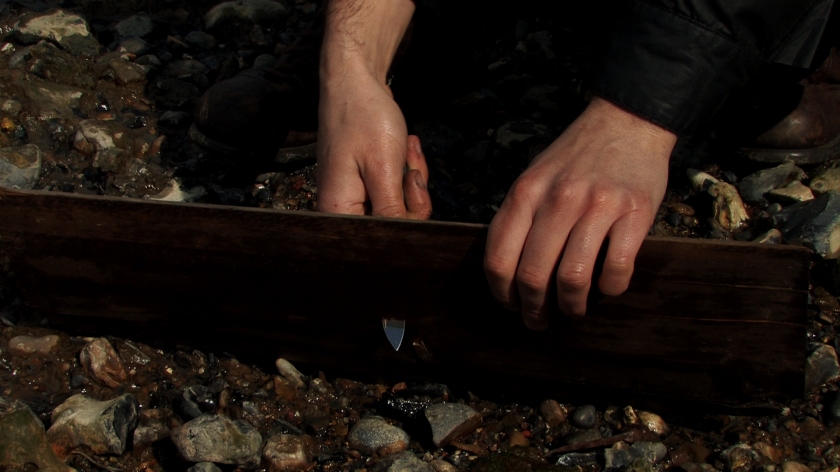 Current artists in residence Mariana Caló and Francisco Queimadela present several chapters from their ongoing project Gradations of Time Over a Plane. The installation includes a new chapter entitled Drifts and Derivations, developed during the artists’ residency at Gasworks.

Working with film, photography, illustration and sculpture, the artist duo has been developing Gradations of Time over a Plane since March 2010. Made up of non-sequential chapters, each of them independent but brought together through the installation, the work explores different notions of time in relation to Man and the Land. Forming relationships with and then filming in various locations in the north of Portugal, UK, the Netherlands and Germany, the artists seek to capture what they see as the temporal essence of different landscapes. This field work is accompanied by extensive research into and deconstruction of various popular, scientific and artistic perspectives on the relationship between Man and the passing of time. The resulting works take the form of immersive installations that offer personal perspectives whilst seeking to involve the viewer as a free interpreter of the visual experience.

The new chapter will be presented alongside a previously composed sequence of video chapters, with a connecting soundtrack drawing together both parts of the temporary installation. The resulting dialogue between new and existing work makes visible an expansion of ideas of the first sequence in the new chapter, but can also be seen as a parallel discourse, in which the new work presents a modification of the original ideas.

Born respectively in Viana do Castelo and Coimbra, Portugal, Mariana Caló & Francisco Queimadela currently live and work in Berlin.
Their residency is supported by The Calouste Gulbenkian Foundation.

This event is part of SLAM Last Fridays.